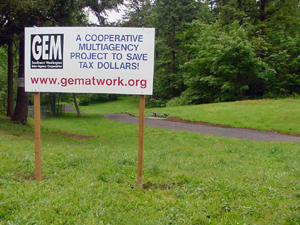 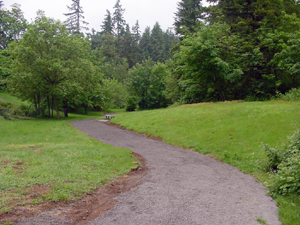 Reprinted with permission from The Columbian
Thursday, May 27, 2004
By JEFFREY MIZE, Columbian staff writer

Betty Plank has found tranquility, right across from her home in Vancouver's Marrion neighborhood. For years, Plank pushed, prodded and cajoled local government to develop Tranquility Nature Area as a place for seniors and people with disabilities, away from playground urchins and unruly skateboarders. 'They will really love having a place of their own,' she said. 'There are 56 parks for kids in Vancouver alone.' Plank wasn't asking for much at the nature area, along the north side of Northeast 14th Street just east of 104th Avenue. A small trail for short walks. A gazebo so people could enjoy an outdoors lunch. Despite her persistent pleas, the response always was the same: Sorry, but no money is available. Enter GEM, which stands for Grounds Equipment Maintenance. GEM is a consortium of 36 public agencies that stretch limited dollars by sharing equipment, know-how and other resources. Terry McClure, Vancouver's operations manager and GEM's current chairman, said the consortium is similar to neighbors helping neighbors.

In GEM's case, those neighbors stretch from the city of Portland through Clark County and all the way to Olympia, taking in cities, counties, school districts, ports and state agencies.

For Tranquility Nature Area, Vancouver cleared brush and excavated for the walking path. Clark County trucked in gravel and spread it to fashion a 360-foot-long trail. Camas sent over a roller and compacted the trail. Washougal will add a couple of benches in coming weeks. One bench was installed in the area last summer as part of an Eagle Scout project. 'Betty also has in mind a gazebo,' McClure said. 'That's really outside of GEM. That's not our bag, building buildings.' The gazebo, 28 feet in diameter, would have tables and benches for 22 people, including room for four wheelchairs. Plank said she needs $20,000 to get the gazebo built. Tax-deductible donations can be made to: The Parks Foundation/Tranquility Nature Area, P.O. Box 2397, Vancouver, 98668-2397. The foundation's phone number is 360-693-7050.

'It will do an awful lot of good for old people,' Plank said.  'They can enjoy the outdoors. They can bring a sandwich and walk around and get some exercise.'

GEM's usual activities involve one government loaning a piece of equipment to another. Developing a small nature area is a bit outside the group's normal activities.

Members were talking about taking on a community project for National Public Works Week, May 16-22, when Bruce Cross, a former Clark County operations manager who now works for the city of Portland, mentioned Tranquility Nature Area.

'When Bruce brought it in, it wasn't tied to Public Works Week,' McClure said. 'But we were concurrently having that discussion.'   The nature area, about 2 acres, is covered by grass and trees, sprinkled with buttercups and other wildflowers and populated by a large contingent of songbirds.

'It's a pasture land surrounded by deciduous trees that turn gorgeous colors in the fall,' Plank said. McClure said he is pleased with the way the area turned out, so much that GEM might take on another community project for Public Works Week next year.

'It's a nice amenity for everybody,' he said. 'And we really got it pretty cheap.' Previously: Betty Plank envisioned developing 'Tranquility Nature Area' near her home in Vancouver's Marion neighborhood.

What's next: Washougal, part of the GEM consortium, will add two benches. Plank will continue soliciting contributions to build a gazebo.